Sister Maureen at the meeting of UISG members with Pope Francis

As I told you yesterday, we had a papal audience today and it was truly wonderful. We were all in for breakfast as soon as the dining room opened at 6am and we left afterwards in a fleet of taxis for St Peter's where we queued up with other pilgrims to go through security for Mass under the window of the Holy Spirit which also shows the chairs of St Peter. We sat in quiet prayer for over an hour until Mass offered by Cardinal Braz de Avis started at 9am. A choir of Sisters led the singing and as we sang everything in different languages we lifted the roof. It was amazing and at the end we all sang the Regina Coeli in Latin.

After Mass, which the Cardinal offered for all our Sisters living and dead, we walked together across to the Paul vi hall where the audience was to take place. I noticed as we went in that the Pope lives what he preaches as on the wall was a big chart saying how much electricity was used and saved today because of having solar panels.

We also had a tour of an exhibition of paintings and photos showing Sisters working to prevent human trafficking in the Talitha Kum project. Once inside the hall there was great excitement and often groups would start singing in different languages.

We waited a long time, but I had a seat in the second row with a perfect view. Pope Francis came in from the back to loud cheering and flags flying. As he got near the front, he saw a Sister he knows, and his face lit up as he greeted her. The first thing he did was ask for his chair to be changed as they had given him a big one with wings while our president Sister Carmen was to sit next to him on a normal dining chair. He wanted matching chairs. He turned to Carmen and said I wrote a speech, but it is boring so I’ll give it to you to copy and you can send it out. I would rather talk to you now. He answered about half a dozen questions from the floor and spoke to us as representing the Religious of the world. He repeatedly said we should serve but we should not accept servitude. He said help me in this: I do not want priests to have Sisters as cooks and cleaners. You can do that work if you wish but do it caring for the elderly or children. Work of service yes but no servitude.

After the talk which will be published, he then greeted each member of the executive and each of the delegates. It was a truly humbling experience as he took my hands and asked in Italian where I was from (thank God the Spanish is similar so I understood). I told him on behalf of the Sisters in my Congregation and all the other Religious in England whom I was representing, we would like to thank him for all he is doing in so many ways especially for the rights of the poor and suffering. He smiled and asked me to pray for him and the priest following him gave me a rosary.

After the audience we looked at the Talitha Kum exhibition and then gradually wandered out of the Vatican and through the main square of St Peter’s to get a taxi back to the hotel. The end of a wonderful day for all of us. 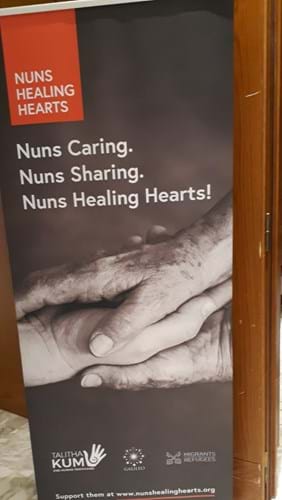