Your prayers are requested for the repose of the soul of
SISTER MOIRA GEARY
who died at Franciscan Convent, Blackburn on Monday 7th June 2021

Moira Geary was born on 18th January 1932, the eldest child of Thomas and Gertrude Geary in Glasgow. She is predeceased by her brother, Brian, and her Sister, Patricia. Leaving school at the age of fifteen, she studied shorthand and typing at the West of Scotland Commercial College and entered the Congregation on 10th May 1953. She entered the Novitiate on 29the June 1954 and made her First Profession in Altrincham on 6th January 1956. In 1957 she was appointed to North Borneo and made her Perpetual Profession on 23rd July 1961 in Jesselton. She served as a teacher in Sandaken, Tawau and Kota Kinabalu until 1969 when she went to the Philippines to do a pastoral course for a year before she returned to the UK.

Sister Nuala McGarvey who lived with Moira in El Guasmo and Blackburn said of her “ In El Guasmo each day had a drama of its own ranging from emergencies in the dispensary to tragedies in local families and Goverment coups. Sister Moira gave stability to our lives with her business as usual approach, set times for prayer and for meals no matter what was happening. She was much loved by the people and easily communicated her sense of humour. She did things quietly and without fuss and once a goal was set there was no changing it. Through her steely determination she navigated the mound of red tape and bureacracy involved in setting up and running new buildings and managed a number of such projects nearby. Moira was forward thinking and her wisdom will be greatly missed.” Moira was also someone who reflected and prayed.

When Moira returned to the UK in 2011 she was made link person with Alice Ingham school to produce the Franciscan Missionary Herald. She was appointed community leader in the Generalate and remained there until a fall necessitated moving to Blackburn so that she could receive the care she needed in 2017. Moira played a full part in community life and attended everything which took place including the Diamond Jubilee of Sister Rosina on 1st May 2021. She suffered from Parkinsons Disease and as it progressed she became increasingly frail and more dependent on the staff for her daily living. She slept a lot and died peacefully just before midnight on Monday 7th June. Her Requiem Mass will be at Good Shepherd Church, Blackburn on Monday 14th June at 1.30pm followed by interment at Pleasington Cemetery.

MAY SHE REST IN PEACE 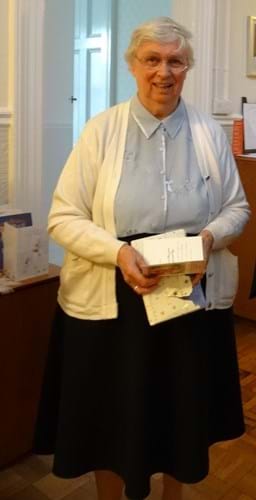