Your prayers are requested for the repose of the soul of

Who died at Franciscan Convent, Blackburn on 16th March 2019

Margaret Henry was born on 15th June 1926, the eldest of six children of James and Elizabeth Henry in Doncaster. She is survived by her two brothers, Martin and Peter and by her three sisters Anne, Eileen and Sheila.

Margaret left school at the age of fourteen and worked as a textile operative until she became a postulant at Altrincham on 3rd January 1948. She became a novice in July 1948 receiving the name Sister Mary Germaine and made her first profession on 4th October 1949. Her Perpetual Profession was in Borneo in 1954.

Following her first profession Sister Germaine spent just a year in Patricroft before being appointed to North Borneo where she ministered as a teacher and later as a midwife in Penampang, Jesselton, Toboh, Kota Kinabalu and Sabah for the next twenty years. Whilst in Jesselton she did her midwifery training and then during home leave in 1968 she also qualified as a teacher.

When the Sisters were expelled from Borneo in 1971 Sister Germaine began a new career in social work and qualified as a Social Worker from Manchester University in 1973. She worked in the Family Welfare Centre at Rochdale until 1975 when she was elected to the General Council and then appointed as Secretary General, an office she held for nine years when she was appointed to Mill Hill as local Superior. She remained a General Councillor until 1987 and after the General Chapter that year she was appointed to Kenya first of all as the administrator at Kaplong hospital and then as the first secretary and treasurer of the East Africa Association of Sisterhoods. She continued this ministry until after the 1993 General Chapter when she was appointed as Communications officer and took over producing the Franciscan Missionary Herald. She also wrote a new biography of Alice Ingham which she published under the name of "Quiet Certainty". She lived at the Generalate from 1993 until her failing health necessitated her move to Blackburn in 2014.

Sister Germaine remained very close to her family and she delighted in many family celebrations. She enjoyed holidays in Canada with her Sisters Eileen and Sheila and when she was no longer able to travel she enjoyed weekly phone calls and later on letters or cards from Eileen.

Sister Germaine had a brilliant mind and her wide range of apostolates broadened her knowledge of many things. She was an avid crossword puzzler and a great reader. Patient with everyone else she was frustrated at times by her confusion as her health failed but she still delighted in having visitors and could always be relied on to entertain visitors if no one else was around. She was a peaceful person who walked away rather than have an argument only to return later as though nothing had happened. She was often teased about her preference for a china cup and saucer and her special one person tea pot which was always warmed before the tea was made and she accepted it in good humour.

As member of the Associates team Sister Germaine gave talks to the first groups about Alice Ingham and the history of the Congregation which they found not only informative but also entertaining. Germaine loved to sing and for several years she attended monthly Taize evenings at Salford Cathedral. The last two years of her life in Blackburn were difficult because of both physical and mental deterioration but she always went to Mass when she was able and she enjoyed a special Mass and celebration on her ninetieth birthday.
Sister Germaine was very poorly at the time of Sister Austin's death but then she rallied for a few days before deteriorating again in early March. She was lovingly cared for by our Blackburn staff who insisted that she remain at home and not be hospitalised when she became very ill and they cared for her until she died very peacefully on the morning of Saturday the 16th March.

The funeral Mass for Sister Germaine will be held at Franciscan Convent, Blackburn at a date yet to be confirmed and followed by interment at Pleasington Cemetery.

MAY SHE REST IN PEACE 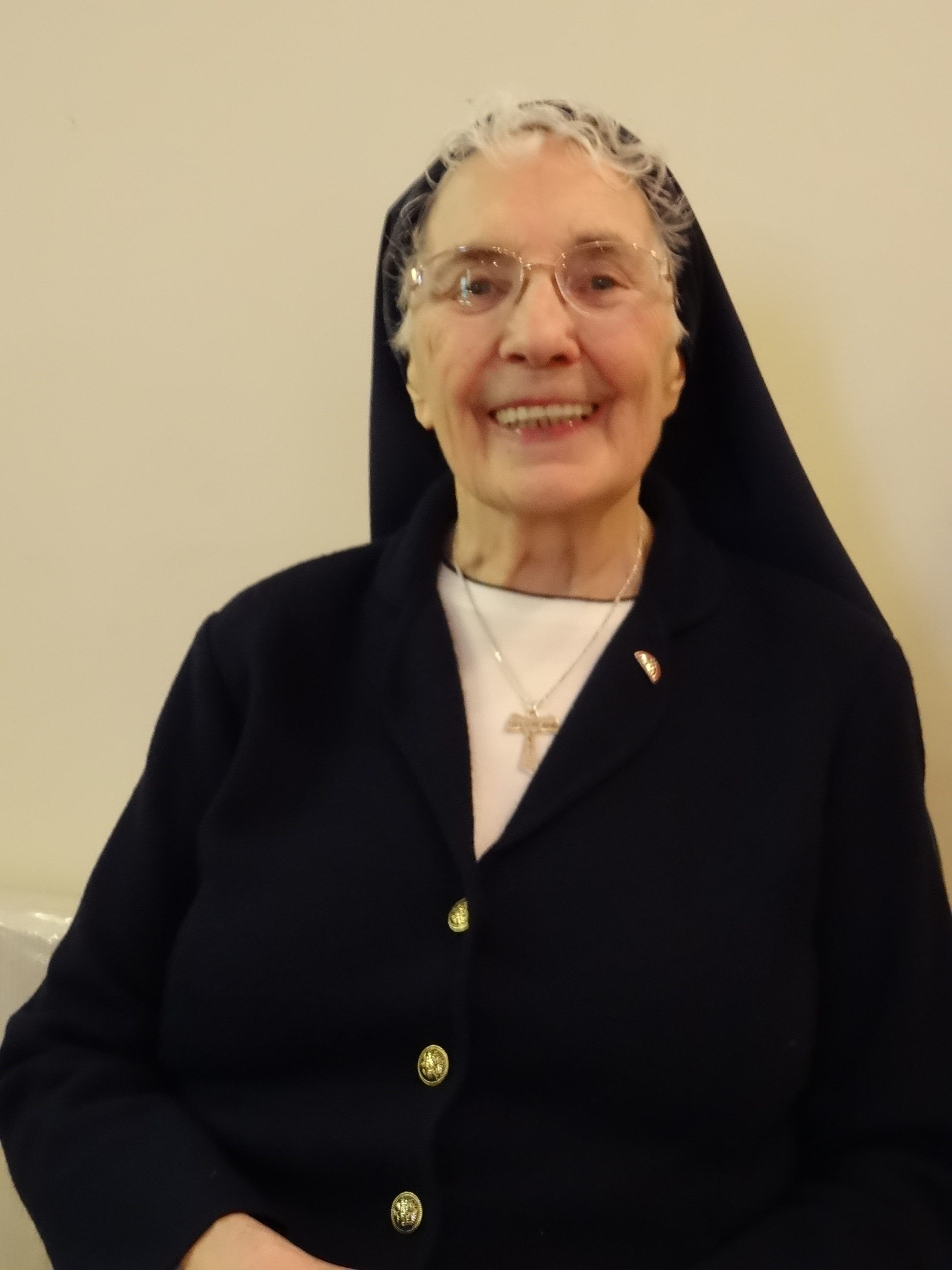